3 Easy (and Surprising) Tips to Get More Done 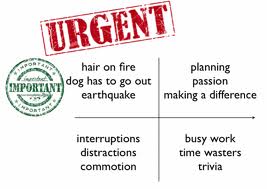 3 Easy (and Surprising) Tips to Get More Done

Many people will tell you they perpetually live in crisis response mode. This means that almost everything they need to accomplish in a day — from changing the batteries in the smoke detector to submitting a project report — is dealt with on the fly.

Many also recognize that living this way is a major cause of stress. That’s where the Getting Things Done (GTD) productivity method comes in.

“Reduced productivity and stress are blamed on surprises and crises instead of on the lack of a system to deal with them,” Tiago Forte said, speaking at a recent class on productivity.

As you might recall, Getting Things Done is a best-selling book that management consultant David Allen released in 2002. On Tuesday night I joined a dozen others in San Francisco for Forte’s class “Get Stuff Done Like a Boss,” which is based on the GTD method. Forte is a full-time productivity expert who helps clients design their workflows.

Capture. Write down all possible to-do items floating around in your head.

Clarify. Decide whether or not the item is actionable.

Organize. Classify information by putting it into one of several “buckets.”

Review. Evaluate your productivity, and your methods, regularly.

Do. Decide what to work on based on priority, the level of energy it requires and the amount of time it will take.

Forte acknowledged that the full method is extremely detailed. So toward the end of the two hour crash course, he left us with three broader productivity tips, none of which were intuitive:

1. Be lazy. Sometimes the most productive behavior is the easiest. For example, creating a formula in Excel to calculate totals is lazier than doing the math column by column on a calculator. However, it’s also more efficient.

Looking for shortcuts is actually quite difficult for hard-working people. “But working hard at something that shouldn’t be done in the first place is just about the worst case scenario,” Forte said.

2. Self-awareness over self-discipline. “Everyone I start talking to or start working with sees productivity as a self-discipline problem,” Forte said. And that causes them to get down on themselves when they’re less productive. But remember that your routine is adjustable. If you’re frustrated by or averse to parts of your workflow, pay attention to those feelings in order to identify where you need change.

3. Don’t run with the crowd. Many people have adopted some of the worst productivity behaviors just because everyone else does them — for example, jumping on each work email as it arrives in the inbox. “We don’t question these behaviors that are really insane when you think about them,” Forte said. So be observant, and evaluate if the status quo really works for you.

What is your productivity method of choice? Let us known in the comments below.