Stop checking your phone in meetings 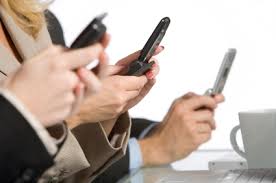 Stop checking your phone in meetings

We all sneak a peak at text messages or emails to pass the time in boring meetings. And yet, we’d also probably all admit that we find it irritating when others do the same.

But a new study from researchers at Howard University and the University of Southern California finds big differences in who’s bothered by it—and by how much. The study, published in the journal Business Communication Quarterly, asked 204 employees at an East Coast beverage distributor and 350 U.S. business professionals in a random-sample survey to weigh in on whether it bothered them if people checked their cell phones. What they found: People are particularly bothered by managers who take calls during meetings, men are nearly twice as likely as women to think it’s okay to check text messages at a business lunch, and even leaving your phone out on the table can be offensive to some people.

In the first sample, the researchers asked open-ended questions and evaluated the intensity of the responses and the number of times certain behaviors were mentioned. They note that people were particularly upset when their managers took calls in front of them. Unsurprisingly, taking or making calls was cited most often as bothersome behavior. But a handful of people said they thought even bringing a phone to a meeting showed disrespect.

The second sample asked participants to say how appropriate or inappropriate different behaviors were in both formal professional meetings and offsite business lunches. Three quarters or more of the respondents said even checking for text messages was rarely or never appropriate. And more than half thought checking the time on the phone, looking to see who’s call was coming in, bringing a phone to the meeting, or even excusing oneself to make a call was inappropriate in a formal meeting. At more informal lunches, those numbers dropped, but more than half still thought it was rude to look at a phone to check text messages or email; a third said the same about stepping away to answer a call.

The study gets more interesting when it compares the views of men and women and people from different regions. (Unsurprisingly, the researchers found that while about two-thirds of people under 30 approved of texting at a business lunch, just 20 percent of those between age 51 and 65 thought it was acceptable behavior.) Meanwhile, roughly half of men said it was okay to answer a call at a business lunch, but only a quarter of women said the same. As for checking text messages, more than 59 percent of men were comfortable with it at informal lunches, while just a third of women were. And interestingly, professionals in the Western region of the United States—home to Silicon Valley, Seattle tech giants and Hollywood’s agents—were less accepting of phones being used during meetings than East Coasters.

The authors don’t suggest why women or Westerners were more likely to consider cell phones in meetings taboo. But the paper does focus on how cell phones have contributed to an increasingly uncivil workplace. They cited a 2012 study that showed hiring managers now value courtesy even more than other traditional soft skills, like teamwork or professionalism. So leave your cell phone behind in meetings, lunches and interviews. Or at least off the table.

Jena McGregor is a columnist for On Leadership.